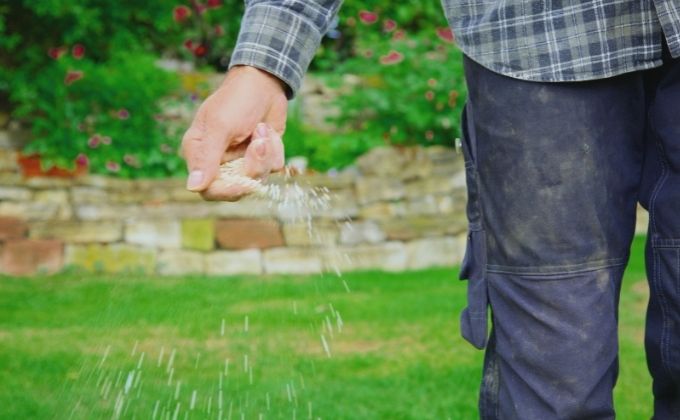 Floratam grass fertilizer schedule It’s best to fertilize your Floratam grass once a month for the first three months after it starts growing in the spring, and then every 30 to 60 days until late fall.

Floratam is a unique grass with thick, bluish-green blades that grow on creepers called stolons, resulting in a thick, resilient, and lush-looking lawn.

It can be grown from sod, sprigs, or plugs and is best suited to sunny settings with at least 6 hours of sunlight.

If you’ve seen Floratam before, it’s likely that it reminds you of the popular St. Augustine grass, which looks a lot like Floratam at first glance.

Floratam has become less resistant to stronger chinch bug variants over time, which are the misery of any landscaper who loves St. Augustine grass. I can attest to the fact that in recent years, I’ve had to deal with more insects harming my Floratam grass.

You’ll be disappointed to learn that fire ant mounds are just as common in Florida yards as they are in St. Augustine and other types of Florida grasses.

Floratam is still popular because it is drought tolerant, has thick blades, grows quickly in hot regions, and chokes out weeds with its thick growth.

How To Care For Floratam Grass

When planted in the right spot, Floratam isn’t difficult to care for. However, maintaining a pleasing landscape necessitates some effort.

The Southern chinch bug (Blissus insularis), a nuisance but minor pest in other forms of turfgrass, is a major issue for Floratam. The mature chinch insect is only 0.3 centimeters long and has black wings with off-white undersides.

From April to October, adults and nymphs in various stages of development may infest the Floratam grass at the same time and are most common at temperatures exceeding 90 degrees F.

Armyworms and cutworms are 2 inch long plump larvae that eat both the base of the leaves and the leaves themselves. Foliage is also a food source for sod webworms. These larvae are 3/4 inch long, thin, and grey in color, and they spin silvery, silken webs in the grass.

Defoliation, skeletonization, and uneven dead spots in the lawn caused by fertilization can spread and merge into vast patches of brown, dead grass. Reduce thatch in the lawn and make sure it’s irrigated and fed appropriately.

These larvae can be controlled with a variety of commercially available pesticides.

Another pest of Floratam is white grubs (masked chafers), which can be easily identified by raising the grass a few inches. In fact, grubs feeding on the Floratam grassroots cut through the lawn so thoroughly that it may be rolled up like a rug.

The adult masked chafer is a brown beetle that measures 3/4 inch in length. The larvae have brown heads and are white with dark bands.

The grubs are C-shaped, plump, and around 1 inch long. Patches of brown, dead grass are sins of grub infestation. Birds and moles that eat grubs are drawn to contaminated lawns.

From May to September, the insects are most active. They gnaw on the leaves, leaving little brown spots on the grass that often coalesce into big, dead areas. Adults can be seen on nearby flowers, while larvae toil away on the nearby lawn.

Reduce the amount of thatch on your grass and keep an eye on the larvae population.

Here’s the N-P-K nutrient analysis and comparison of the fertilizers:

St. Augustinegrass (Stenotaphrum secundatum [Walt.] Kuntze) has a wide range of adaptations to warm humid (subtropical) climates. It’s thought to be native to the Gulf of Mexico’s and Mediterranean’s coastal regions.

St. Augustinegrass produces a rich green to blue-green turf that adapts well to most soils and climates in Florida. It has a higher salt tolerance than other warm-season grass species, and certain cultivars tolerate shade better than others. St. Augustinegrass is an easy-to-grow grass that can be planted as sod, sprigs, or plugs.

Like most turfgrasses, St. Augustinegrass has several cultural and insect issues. It necessitates water to stay green and healthy, and extra irrigation may be required during prolonged dry seasons.

It has a low wear tolerance and cannot withstand repeated pedestrian or vehicular traffic.

In some sections of the state, it goes dormant for the winter and turns a brown or tan tint till spring.

Under heavy fertilization and irrigation regimens, it generates thatch, which may pose a health risk to the grass. Because of its coarse, wide leaves and stalks, it does not grow as thickly as other species.

graminis) are all diseases that can affect some cultivars. Chemical weed management can be difficult, especially when dealing with persistent grassy weeds for which there are few herbicide solutions suitable for use on residential lawns.

It grows best in direct sunlight. With proper upkeep, its thick growth habit keeps weeds at bay. Floratam thrives in our hot summers, making it an excellent choice for most Florida houses.

In Florida, there are various cultivars of St. Augustine grass that can be used for lawns. The tolerance to environmental stressors and pest susceptibility of different cultivars varies.

The color’ bitter blue’ was chosen in the 1930s. Despite the fact that ‘Bitterblue’ is promoted as a recognized cultivar, turfgrass producers do not currently have any certified ‘Bitter blue’ germplasm. The ‘Bitter blue’ is commonly advertised as a fine, dense texture and a dark blue-green tint. It tolerates cold and shade well, but is susceptible to chinch bugs and grey leaf spots. It should be mowed to about 3.5–4 inches tall.

Woerner Turf’s proprietary cultivar ‘Classic’ was released in the early 2000s. It can withstand cold temperatures and is widely utilized in Florida and other regions.

University research has yet to confirm its shade tolerance, and there is no indication that it is superior to other cultivars. It should be mowed to around 3.5–4 inches in height. It’s dark green in color.

Environmental Turf’s ‘Delta Shade’ (Figure 2) is a 2005 proprietary release. According to university studies, ‘Delta Shade’ tolerates shade well, but not as well as dwarf kinds. Although no academic studies have been done to validate this, it looks to have good cold tolerance. It has a lighter green tint than some cultivars in specific areas. It should be mowed to around 3.5–4 inches in height.

Floratam grass fertilizer schedule might be the perfect answer for your lawn if you live in a warm-weather climate and want a lush yard that’s resistant to a range of common grass pests, thrives in a variety of soil types, and can survive dry spells.